In 2009 I attended a competition for what I thought was a small business grant, but later I found was “an investment”. I made this mistake in part because I learned of it through the Maine Art Commission which had been sending announcements all year about the availability of stimulus grants – but when one opened the link, it was inevitably and exclusively for non-profits. When The Maine Arts Commission announced a competition for small business investment from an anonymous source I assumed it was a grant for a variety of reasons, including that it was for a very modest amount and that the source was anonymous. I wasn’t paying much attention to those details as I had never entered such a competition before and there was a lot to processing taking place in a short amount of time. As later became apparent the anonymous source was the Small Enterprise Growth Fund, an investment corporation chartered by the Maine legislature to serve as an “instrumentality of the state”

Throughout the entire process brevity was required, from filling out the initial application to presenting an “elevator pitch” which means pitching a business idea in no more than five or ten minutes. According to the thinking of government economic developers, if a plan is good , one can present it in five minutes. As you can see, I am doing the exact opposite in Kickstarter Diaries as I take my own time to let my idea unfold.

I bring this up because I have come full circle. The project that we will likely select for the KickStarter project is the same as the one I presented then- making production molds. The “guidelines” for the “elevator pitch” advised talking about one’s vision and so I did- but only as context, just as I am talking about my larger vision in KickStarer Diaries to give the Kickstarter project, which we will eventually launch, its proper and larger context. There is no way that the amount of the investment being offered at the pitch competition could be adequate enough to capitalize my larger vision. In my naivety I presented an elevator pitch for a project that could be capitalized by the amount being offered. Kickstarter is set up in an much more advantageous way. One can select a small and easily achievable goal that assures that one gets to retain the money raised, but one can also generate money beyond that goal that can be applied to the larger vision.

Andersen Studio has many original mug designs. Currently each design has only one or two molds. we need to create rubber molds for each design so that production molds can be easily reproduced. The line of mugs can be marketed as its own product line and is a potential item for contracting with other ceramic studios to produce and even develop new patterns and finished.

I was surprised when the response from Mr John Burns was “excellent” and even more surprised when the question that he asked was to explain more about my vision in the two minutes that remained in the allotted time . I didn’t see how I could say much more than I already said unless I said a great deal more and clearly there was no time for that and so I said succinctly that the idea is modeled on the United States of America, intending the relationship between the parts and the whole.


Despite Mr Burn’s enthusiastic response, I was not the one he selected as a semi-finalist from his group. That would be someone whose idea was for an “organic running tee shirt”. He had a better “exit strategy” than I. He said that he would just sell his business to his competition, which I thought, was likely Nike or Adidas, companies notorious for producng their product in China which happens to be one of the most polluted countries on earth. Sure, I’d buy an organic tee-shirt made in China. Why not?


As was revealed in the follow up correspondence, when Mr John Burns said “excellent !”. he was not talking about the mold making project. he was talking about my vision. His written comments were something to the effect that I had the mold-making aspects all worked out but I hadn’t presented a good plan for my vision, which is because a vision is an idea or a concept  that pre-exists a plan- and of course because it is ludicrous to suppose that one could achieve the larger scope of the vision with such a small investment. Mr Burns also said that I did not have an “exit strategy”, which further conversation revealed means a plan to sell the business so that the high growth investors can make a profit. This is true. I did not have an exit strategy because it has nothing to do with my motivations, which is to preserve the ceramic life style for future generations. Andersen Studio has always been committed to being made in America. Chances are if one sells the business to high growth investors, production will be outsourced to China or which ever is the country du jour with the “cheapest” labor. This is what has happened to the pottery  industry in Great Briton. 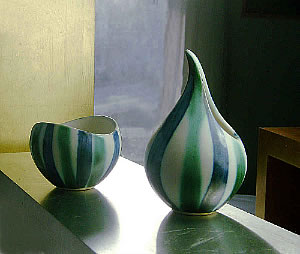 Andersen Studio has a comprehensive and layered inventory of ceramic disign accumalated over 60 years. There are many different lines with our collection. Our vision entertains the concept that we can work with other  United States based ceramic slip casting studio’s, which could specialize in selcted components of our line,  possibly developing their own glazes and decorations and their own designs to complement what Andersen Studio has begun. As a collectible brand, Andersen Studio can be an effective marketing entity in the modle of fashion design houses which are carried on by future generaions in the name of the original founder

Of course this sort of misunderstanding and cross purposes is part and parcel of trying to present an idea in five minutes. I think Mr Burns was listening for that one thing- how will the high growth investor make his profit? Where is the “exit strategy?, which to my ears has little to do with “creating jobs” which is how the government justifies “appropriating” from unknowing taxpayers, what amounts to 10% of the SEGF”s investment capital, which the legislation/charter states will be used to cover administration costs. My idea is not only about creating jobs but preserving a meaningful working lifestyle, which provides an opportunity for those involved to develop an income of their own making. Two things that my father told me that left a long lasting impression are that our business creates jobs and that if one wants to be content, make ones self part of something larger than one’s self. A ceramic slip-casting studio does both.

More about the SEGF HERE