Recently two beautiful wine decanters, designed by Weston in midcentury, were returned to us. I date them at the late fifties or early sixties because the wine decanters were not produced as frequently by the seventies, to my recollection, as the wild life sculpture line and other functional designs became predominately featured.

The form is understated in its simplicity. There are other forms of the midcentury or mid-century-inspired-era based on a bulb with a thin elongated neck but this form predates most of them. There are forms going back to antiquity based on a bulb with an elongated neck and yet I have never seen one that resembles the particular design choices made by Weston when he created this form for the first Andersen Design line to be marketed to the public.

The cast and fettling of these two decanter-vases is perfectly executed, bringing out the finer sensibilities of the design. The fullness of the bulb is anchored toward the ground. The bulb elongates, curving inward in both upward and downward directions. The downward curve is shorter for security at the base. The bulb elongates upward and tapers to a reserved degree before it expands outward again, without extravagance, toward the heavens, like a bulb flowering from earth to sky.

The glaze and the application of the glaze is accomplished with the perfection of skilled craftsmanship. The white glaze differs from the andersen signature look. It is a glossy white rather than a matte. The glossy white compliments the sensuality of the forms curvature.

Glazing is one of the most intriguing and seductive arts of the ceramic designer craftsperson. It is both a science and an art. It involves molecular interactions which cannot be seen with the naked eye requiring an understanding of chemistry worked out as mathematical relationships. Every material has a different combination of oxides, which have different melting points and affects on other oxides. The glaze has to be matched to the body and daily attention paid to the water level and additives which regulate the flow of the glaze in both its first untempered character and as it becomes hot liquid glass flowing on a body of interacting clay molecules. 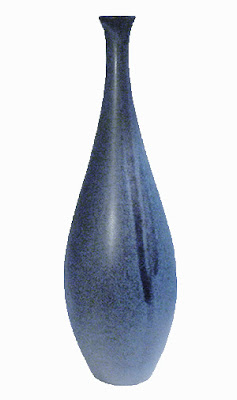 The Blueberry glaze is perfectly applied. The surface is smooth, embedded with deeper tones in speckled variegations. As the decanter was turned during the glaze application, the glaze flowed together on two sides, producing two elegant streams of a deep blue color. One stream is subtle and the other pronounced. The tactile surface is uninterrupted and smooth to the touch. The glaze meets the bottom of the form evenly with only one discretely present bubble aligned with the contrasting coloring where the glaze streamed into itself producing a darker tone. One must look closely to perceive it.

When Dad created his glazes he had to calculate everything by hand but today we are lucky to have a genius among us named Tony Hansen who created an invaluable glaze calculating software called digital fire or Insight and an ongoing blog which discusses many of the problems and sought after solutions in this fascinating field. Enter your materials and the program calculates the chemical information in an instant, but the hands on process of creating ceramics remains the same as it has been since the dawn of civilization.

These two beautiful decanters began their lives like Siamese twins, bonded together in the kiln by a happenstance of placement when loading the kiln. They were placed too close together and were joined together during the transmutational process of heating and cooling.

There after was an attempt to separate the pair which created two matching holes around the center of the bulbs. The holes did not bother me but rather seemed a part of the union lasting for over half a century, a bond made stronger by history, one at birth and inseparable ever since, even after a forced attempt was made to separate them. 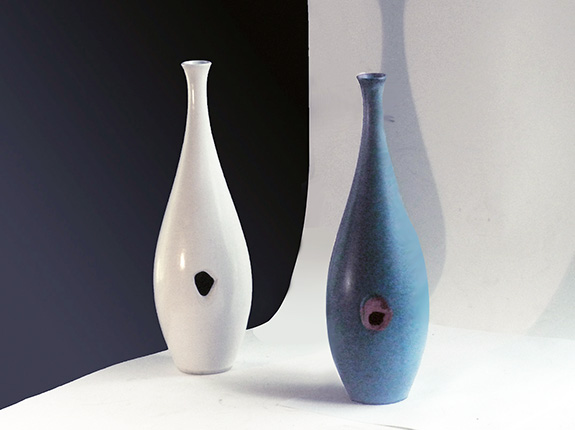 However when I recorded an image of the torn asunder decanters, I could not view it, I was filled with feelings of horror at the human capacity for evil. The image so sickened me that I immediately clicked it out of sight. In the two dimensional version, the vases had been executed! The feeling was amplified by the three dimensional vases sitting on the table top.

In the instant of perceiving the two dimensional vases as an execution, The restrained simplicity and refined craftsmanship of the whole vases in three dimensions became a memorial of every human soul whose life has been cut short by the horrors of human destruction. The contrast between one view of the vases and the other heightened the understanding of why mankind’s desire to create objects of beauty matters.

In the early twentieth century Marcel Duchamp reacted to the concept of art as created for the viewing with the eye, only, referring to the prevailing concept of art as “retinal art’. Duchamp was one of the most influential artistic and intellectual minds of the twentieth century. His first controversial art work was The Nude Descending the Staircase, created at a time when nudes were commonly depicted in art as rendered realistically in the style of Renaissance Art, but Marcel was interested in deconstructing and reordering thinking about art. It was a time  when science was breaking old concepts of nature as defined by the most common human senses to discover an underlying dimension in which the laws of nature in the quantum domain contradict the laws of nature sustained in the classical paradigm. Heisenberg’s uncertainty principal introduced what Bohr called, “the end of what we can know” as it became apparent that the act of observing was affecting the observed and that position (space) amd momentum (time) could not be measured simultaneously. The Nude Descending the Staircase expresses the new revolution in man’s perception of nature and reality as it attempted to transcend a portrait anchored by classical time-space co-ordinates and depict a quantum superposition. I do not know if all of that was transpiring in Duchamp’s mind but the idea that art transcends the intent of its maker was inherent to Duchamp’s thinking about art as a conceptual process in which the artist could chose a work of art, rather than making it and the artist surrendered control of the work of art to other factors.

After a time, I could view the two dimensional artwork and see it as two vases with holes, clearly not bullet holes which would have shattered them to bits. The vases and their history are inseparable from the artwork which they have become. They were bonded together at birth, pulled asunder but inseparable after over half a century, art created through the passage of time, which ultimately highlights the original instinct which brought them into being, man’s quest for beauty. Their beauty may be retinal but their journey is conceptual, open to interpretation. What made them inseparable? Together they became one when they were broken apart as a shared experience.

This blog series is introducing a collection of rare and one of a kind historical works to the public. The prices for which these rarities are being offered is high relative to the selling prices points for a line which originated with the idea of creating a hand made product affordable to the middle classes but modest relative in the marketplace of rare and one of a kind collectible objects. The idea of establishing a production studio with such a purpose as to create a hand made product affordable to the middle class, was a response to the industrial era of plastics. Weston and Brenda began Andersen Design at the pinnacle of America’s great middle class era, a time when the greatest amount of wealth was distributed among the greatest number of people. Today the world has been re-ordered on completely different terms, but like the two vases, there is no way to separate Andersen Design from its history and from the unique moment of its birth or from the process of making something by hand, the pursuit of beauty, and philosophical artistic, and economic choices made in response to the industrial and technological era of their day.