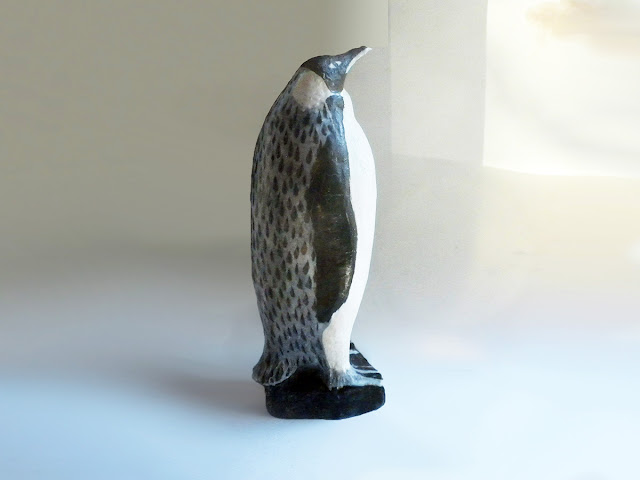 In my last post I began a discussion about how one identifies the author of a piece, pointing out the importance of the signature but that the signature can also be misleading. The true signature is in the hand of the artist which is as unique as handwriting. This One of a Kind Vintage Emperor Penguin was created when the decoration for the production design was under development. The overall uniformity of the pattern is one of the keys to identifying that the penguin is decorated by Weston and not by Brenda. 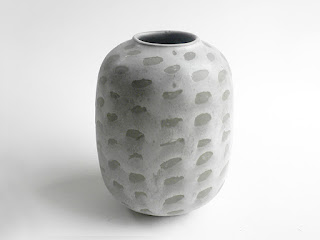 Weston’s hand is patient, disciplined and rhythmic. The pattern is systematic but not mechanically uniform. Weston takes a philosopher’s approach to pattern. The components of the pattern are integral to an inseparable expression of wholeness. The state of mind is at one with the beingness of existence. Weston patientently executes the teardrops in an organically flowing rhythm on the backside of the Emperor Penguin. A similar approach to pattern is shown in the vase, by Weston, to the left. The parts are irregular dabs in an organically organized formation which produces an overall effect which appears deceptively as regularity, like life 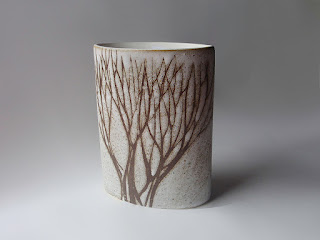 Brenda’s approach to pattern is as a narrative, While Weston’s approach might be compared to that of the drummer, Brenda is the dancer who lays a linear story line over the background of the beat, one might say, a beatnik pattern maker, as the artists culture was called in her day.

Brenda is likely the creator of the tree pattern. Trees all tell a story of life, responsive to the rain, wind, sun, moon and stars, causing their branches to reach out in a way unique to each individual tree. The philosopher focuses on beingness while the narrator tells the events of an individual journey through time

My own childhood artwork can be identified by the wreaths I placed around the  characters. This is how I envisioned the world in my first philosophical conceptualization, as I sat, at the age of five, in the midst of an unmowed grassy field, most likely the first summer that we lived in Maine. I thought about myself as a circle, and my family as a larger circle, and the other people in the world as an even a larger circle.The whole world was the largest circle but it could blow itself up. That didn’t make sense and ruined the whole concept. I had going in my head. 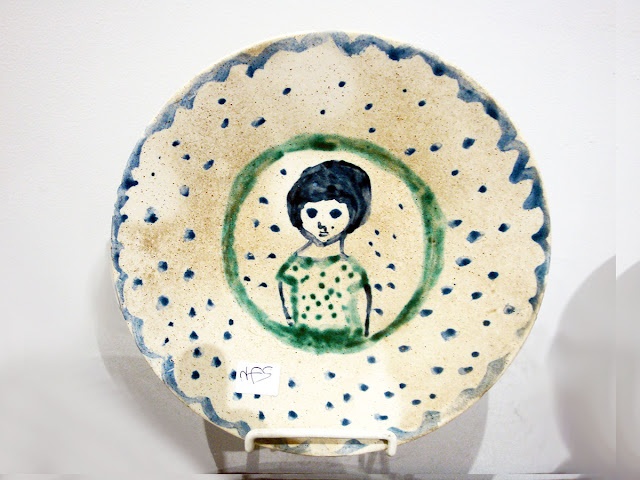 If the figure in the center looks dismayed, that is why. That’s my generation, the first generation born into a world which could blow itself up. We had to practice hiding under our desks but we knew it was much worse than that. Other generations have since been born into the same world but the way of dealing with it changed and children in sub primary class no longer have to practice hiding under desks preparing for an atomic bomb attack. Now they have to prepare for other kinds of attacks coming from their most immediate circle, 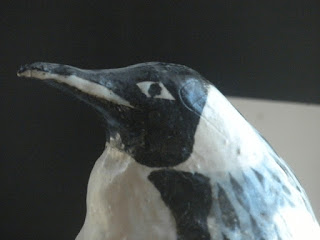 The eyes of the Emperor Penguin repeat the tear drops in stark black and white. Gray claws grip the base like a pronouncement of creaturehood. The sculpture has the mildly rough surface of a freshly sculpted piece cast in its first mold and the beat goes on.