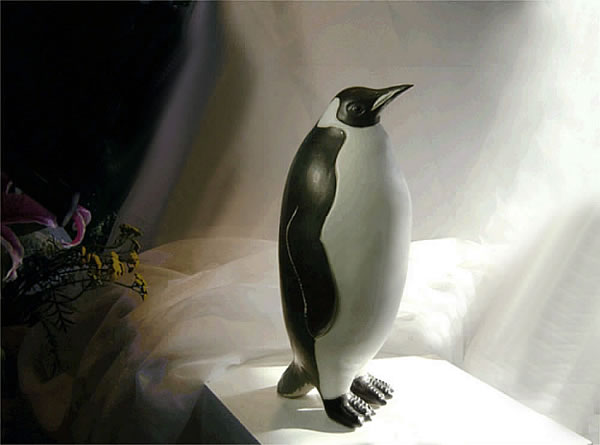 Dad was right about working on my sculpture from feeling only. The Tufted Titmouse is moving ahead faster than before as I find I have a clarity about what I want to achieve by working in this way.  Dad seems fascinated by the sculpture as an object of study that he frequently caresses. He is doing amazingly well.

Meanwhile, I continue to work on getting the items of our line published online. Once they are up, they can be activated and deactivated at will.  Yesterday I published the Emperor Penguin.

Our KickStarter Project is stalled at 12% of our minimum goal needed to retain any funding. We have however seen an increase in email sales and sign-ups on our website.  I am already brewing some ideas related to this effort but now is not the time to reveal them- however I may release them early to our email list for which one can sign up HERE

Whatever the results of the current fundraising project, it will remain published on KickStarter where the our vision of a Great American Ceramic Designer Craftsmen Network will receive exposure and I plan on continue to publish my Kickstarter Diaries Blog, on Google and on Kickstarter.

A while back  there was  a response to my vision from a young couple located near us. She is pursuing her own business as a ceramic designer and he is a painter and a professional brander. They gave us a presentation about marketing  founded on the idea that we should market to the “influencers”  and produce our work as a limited edition line at a much higher price point.

The original contact was with the wife who contacted us in regards to slip casting,  which she has pursued on her own but not with us. We cannot offer a high wage to meet expectations based on the income made in an urban environment, and so I attributed that as the reason why no real working relationship came about through that connection. After the presentation was made, there was no offer and we were left wondering what was the purpose.

Since then, I have intermittently engaged an email dialogue with the husband, a professional brander. He consistently tells me that everything I have done is wrong, and so, I did not contact him before launching my Kickstarter project but waited until there were 12 days to go and then I said to him “If you can make this KickStarter project fly- then I will be impressed- and if you want to brand us then brand us for the unique business that we actually are”.

He told me that the project was failing because everything I did was wrong and so I thanked him for responding and told him that he had answered my question.

And the email dialogue continued on .

Eventually, he said that we should be offering a wage, suggested a not unreasonable wage and shared ownership of our company – with OWNERSHIP- all in capital letters.

And I said that the idea of the Great American Ceramic Designer CraftsmenNetwork is that it will be a network of independently owned studio’s sharing resources somewhat on the model of a franchise- which is different that sharing ownership. One does not enter lightly into shared ownership- does he see the difference?

I have to say that if there were an offer of a sizable investment on the table such a demand might seem reasonable, but other wise the demand just fails to acknowledge the trade off in terms between owning one’s own business, especially a micro economy business, where in all of the employees must be paid before the business owner. The employee enjoys the security of a guaranteed pay check, which the business owner does not. I had just told my friend that it took years before my parents started making real money- after I had left home. It’s hard to imagine anyone in this day and age going through such a long struggle.

In the franchise model, there is a contractual agreement between independently owned businesses. Each business has the responsibility of running their own operation in such a way that they make a profit. The contractual agreement between the two parties should grant each a fair chance to profit by the terms of the agreement but does not necessarily mean that the agreement is the sole source of income for either entity. The idea is to provide a leg-up to other entrepreneurs using the resources that our business has created, From there the relationship should grow in its own form organically. The parties may find that they want to work more independently or more collaboratively based on the development of the relationship between the two parties and external considerations as well. Once the terms of relationship are established, then if there is a purpose and advantage to shared ownership, there is a viable basis for working that out. Shared ownership is not an entitlement. 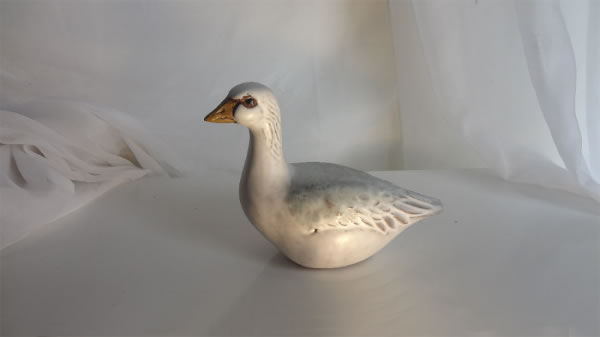 The Goose Facing Left or Right has been recently updated

My friend did not seem to understand that the great American Ceramic Designer Craftsmen Network is envisioned as a private sector network of operating micro-businesses. He referred to it as a ceramic educational center, which it is only to the degree that our business has always trained the employees on the job

We are currently working with a young woman who came to us with a ceramics industry background. She worked with a relatively well known pottery on the West Coast and so like us has worked in all aspects of the business from mold making to slip-casting to marketing to business management. We are currently working with her as an outside contractor and thus far find the relationship is very compatible. Today we discussed our eCommerce software which has many functions that we have not been able to familiarize ourselves with and utilize to its full capacity. She will be looking into that and helping us to utilize it effectively. She seems to have a good organizational mind and the attitude that we all need to work together to build our resources potential so that we can all make money. That is the spirit that reigns in the micro-economy and the spirit that our country needs to nurture in these difficult times. 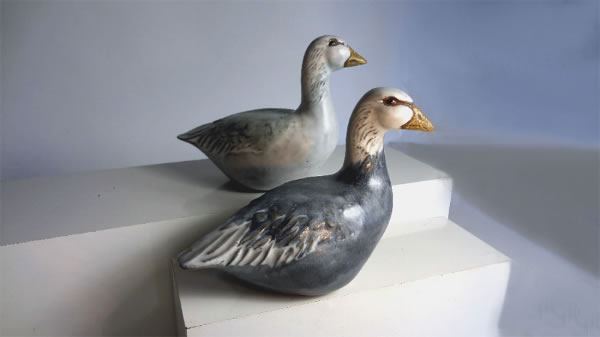 Two Geese are better than one!