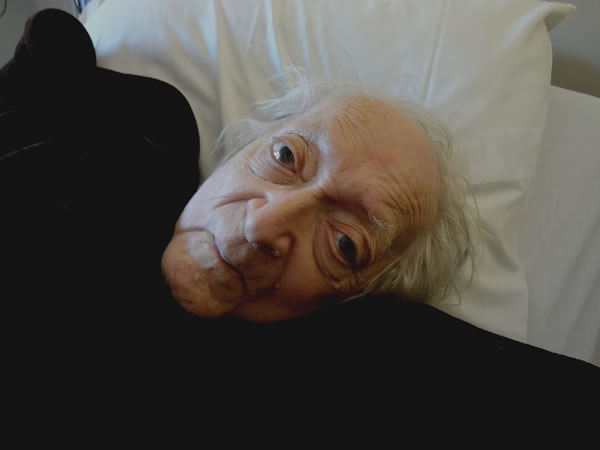 This is Weston Neil Andersen, the father of Andersen Studio Ceramics. This photo was taken a few months ago when Dad was at Maine Midcoast Hospital. He recently returned from rehab,where he was diagnosed as “in decline” as is the way things are trending in health care for the elderly these days.. Dad caught a bad cold but it was diagnosed as “swallowing troubles”, which we didn’t think true, and as it turned out, we were right..When we brought Dad home, he could hardly hold up his cup and he barely spoke and if he did it was in partial thoughts.

But he has been getting better ever since because what ailed him has common causes with common cures. It’s amazing to see him improve. He now talks in complete sentences with complex thoughts even though he suffered a brain injury about two and a half years ago. His physical strength is getting stronger as well.

I have long been aware that Dad reads my mind. I write blogs and engage in internet discussion forums and even though Dad is not involved with these activities, he  engages the ongoing train of thought.

So today he looked at me and quite suddenly said “I know what you feel” and I knew what he meant since I was feeling all the tension of being engaged in the progress of this project, which is somewhat  like being in limbo. One has to normalize but within a thirty day time span more or less,which really isn’t normal at all.

So I sat down with Dad by the fire because I knew he wanted to talk to me and he spoke about “it” being involved with one’s whole life. Everything he said made sense without specifically identifying the subject of the conversation. We both knew what it was.

This process requires a lot of thought control, doing things to get one’s mind off the project and then finding one’s self promoting it like an involuntary activity that just occurs on its own.

My plan is to work on a sculpture that has been lying dormant for quite sometime in the wax stage, which comes after the plasticine stage. My brother, Iain, delivered another sculpture that needs some work. I placed  both sculptures on the kitchen table and Dad became very involved with them. I have not seen him take such an interest since his brain injury. He said of my brothers sculpture that it had four sides. I asked if that was good and Dad shook his head no. I understood what Dad meant. A sculpture should keep the eye moving around it- not stopping the eye. It’s very exciting that Dad’s interest in sculpture is returning for the first time since his brain injury. It looks like Dad isn’t in decline.