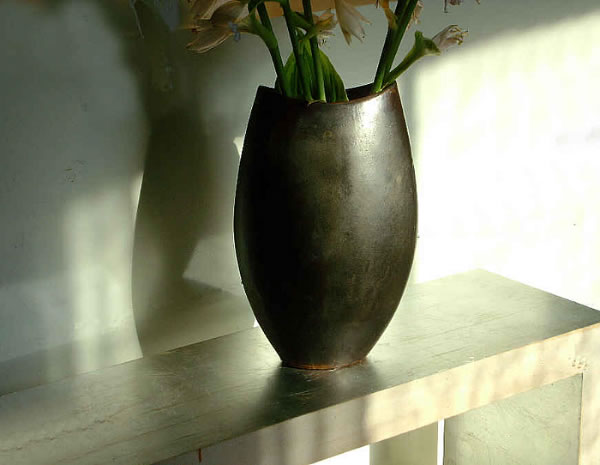 When my parents decided to create a handcrafted product, affordable to the middle class, they “innovated ” their own category which existed somewhere between factory made table top ceramics and handcrafted art ceramics sold in high-end art galleries. There has always been a great deal taking place in ceramics that does not fall into any of these categories because ceramics attracts so many individual artists working in many different ways, and so this statement is made  within the frame work of larger categories, which are used by galleries, organizations, competitions, shows and governments.

For instance design shows tend to focus on designs that are reproduced in a factory setting. For some, factory settings have a bad name  as a throwback to the days of the “sweat shops” but that is not what I intend here. Factory reproduction uses “precision methods” which often involve the use of jiggering machines to create the desired uniformity. They usually have temperature and humidity controlled environments and use glazes that are consistent, producing an even and predictable service. Decoration is often applied with decals and if hand-painted, maintain a set pattern and brush stroke. The results can be very attractive. In the 1950’s designers like Eva Zeisel and Russel Wright and others were producing what has become the signature lines of the mid-century movement for the American dinnerware companies. A few of these companies are still existing today, such as:

Homer Laughlin China Company, “By 2002, ownership of the company was shared by third, fourth and fifth generation members of the Wells and Aaron families and others.  Many of the shareholders were scattered throughout the country and had little involvement with the business.  In an effort to consolidate resources and provide improved direction for the company, Joe Wells III, together with his sisters, Jean Wicks and Elizabeth McIlvain, purchased the interests of the other stockholders.  In June, 2002, Joe Wells III was elected president and chief executive officer.

Since the re-organization, the company has experienced continued growth and is poised to move forward with the Wells Family’s pledge to continue producing quality, American-made china and provide jobs for potters of the Ohio Valley. ” quoted from Homer Laughlin websight

Heath Ceramics is part of the California tradition. Heath uses the slip casting method and has an impressive production studio. If you look at their process slide show, you will see a picture of the mug molds which look very similar to our mug molds , except the designs are different. See Heath Mugs here ** Heath makes their own glazes, which appear to be of the consistent nature preferred by dinnerware productions. Andersen Studio also makes our own original glazes which are categorized as “art glazes” because they are not so predictable, using more fluxing materials than production glazes which cause the glaze to flow, creating interesting effects. Since we started our line in the 1950’s our original glazes have distinguished our signature identity, creating a unique Andersen style. Dad also made the decision, early on, before environmentalism was a popular movement, to avoid using toxic materials such as cadmium red. That decision contributed to and encouraged the soft marine and beach tones for which Andersen Studio is known.

Andersen mugs could be made using standard dinnerware factory techniques,and be very attractive while still producing a hand made version of the same mug using art glazes and decorative techniques. Yves Saint Laurent, the fashion designer created the rive gauche line as a simpler, less expensive and sportier alternative to his couture line. 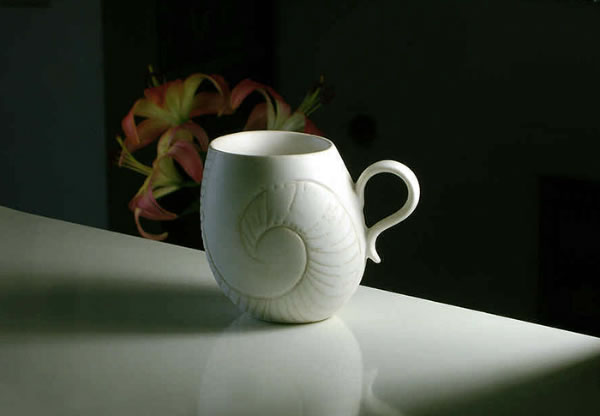 This slip-cast stoneware mug was hand-carved and then glazed. The glaze flows over the carving with a natural quality- not perfectly as in “precision manufacturing” but with an occasional skip that fills in the carved lines in a manner that is in keeping with an organic quality.  the carved design can be hand carved in to the mold without losing its natural characteristic. Mug copyrighted by Andersen Studio on or about 1995.

By serendipity, as I am writing this blog , I am interrupted by customers from Virginia . He works for Homer Laughlin and tells me that they produce 35,000 pieces a week of which 80% is flatware. He says they used to slip cast mugs, but now jigger them. As far as production is concerned, he says it is all robotics, embellishing that by saying that our work is much prettier, representing the kind of product that brings them to Maine. I am thinking that Homer Laughlin with its huge production and “precision” process is the kind of manufacturing that Maine’s government management of our economy seeks for Maine.

The Collector’s Eye
Decorating with the Objects you Love

“Responsible for changes good and bad in architecture and design, the industrial Revolution changed the manufacturing process of pottery for good. New factories spat out thousands of pieces of pottery per day – their goal to stock kitchens and dining rooms of middle-class Europe and America quickly and inexpensively.

The Scandinavians were the first to rebel. The y began to address the need for “good design for every day use” around 1916. For Swedish artist and alchemist Wilhem Kage, that meant inventing hundreds of new glazes.

Also thumbing their noses at machine-made perfection were Weston and Brenda Andersen of  East Boothbay Maine ( many of their pieces are seen in this spread)” ristine Churchill, published by Harper Collins

*Dad was both a student and colleague of Eva and was invited twice to apprentice for Russel Wright, which he perceived as a position he could not afford to take if he were to be able to support his family,

** The link to the Heath Ceramics Process that I posted above did not connect to the slide show, which is to be found under the Art Of Making and includes a picture of production slip casting mug molds, which you can see includes the handle. The picture that the link opens shows a handle being attached by hand to the form of the mug. Such a handle could be incorporated into a slip-casting mold. I suspect that the body of the mug pictured was produced with a jiggering machine, which, to my understanding is a mechanized throwing machine  that spins the liquid clay with centrifugal  force as the mold is mechanically rotated beneath it..