I saw this Posted on FaceBook by Wendy Rosen, a mover and shaker in the American crafts market:

Wendy Rosen has been advocating for indelible labeling of imports for years. During the beginning of the Baldacci administration, Wendy Rosen sent me an initiative on this and I submitted it to “the creative economy list serve” a list serve sponsored by Maine’s public-private government, jurored by its friends. My message asked Mainers to contact Olympia Snowe but the overlords of the listserve rejected my submission.

I then took the message to a local craft fair. I could not even finish my first sentence before people were grabbing it out of my hand. I told them that it had been rejected from the list serve. Someone suggested I contact Mrs Baldacci. I did so but did not get a personal response from the Governor’s wife. However, several months later I received a demented apology from the list serve jurors, explaining that they thought it was spam.

Years later while researching for my book, “Public Private Relationships and the New Owners of the Means of Production”, I learned that the labels are removed at foreign trade zones. Maine receives federal money for setting up foreign trade zones. Corporation with shareholders are required to maximise profits, which they do by locating production where labor is least expensive. Large corporations make higher profits than American made hand crafts and so the state protects the interests of global markets, as is written into the Legislative treatise establishing the DECD, which manages the foreign trade zones. The findings section of the statute establishing Maine’s Department of Economic and Community Development illuminates a a philosophy in which the State’s function is to facilitate globalism and to conform to the new world order in which manufacturing takes place where ever the cost of labor is the least in the global economy.

The Legislature finds that the State’s economy is linked to the national and international economies. Economic changes and disruptions around the world and in the nation have a significant impact upon the State’s economy. The rise of 3rd-world and 4th-world countries as manufacturers of commodities for mass markets and the gradual evolution of the national economy to a technological, informational, specialty product-based economy have significantly affected the State and its communities. [RR 2013, c. 2, §5 (COR).]

Note that in this statutory rhetoric, enterprises, municipalities, and labor force are treated as belonging to the State. For argument’s sake if you take the phrase “The State” out of the sentence, it conveys a different meaning, ie” In order for the Maine economy to grow and gain a solid footing, it is necessary to determine the assets and the economic opportunities that are or will be available to enterprises, municipalities and the labor force.”  The state’s interest lies in managing the entire labor force in the state, which explains why entrepreneurialism is inconceivable in the bottom half of the economy which the state does not serve because it only serves “the quality jobs sector” which by definition is that sector offering a higher than average income- subsidized by the state of course! The entire labor force of Maine is conceived as belonging to the state, along with the enterprises and municipalities. The state gains ownership of the municipalities through regionalism, which gradually eliminates the municipal referendum as it transfers decision making to regional boards. That is why business ownership is discouraged in the bottom of the economy. The state has created a taxpayer subsidized top of the economy designated as the “quality jobs” sector, in which the state plays the role outlined in Mussolini’s Doctrine of Fascism.

Conception of a corporative state
The Ministry of Corporations is not a bureaucratic organ, nor does it wish to exercise the functions of syndical organizations which are necessarily independent, since they aim at organizing, selecting and improving the members of syndicates. The Ministry of Corporations is an institution in virtue of which, in the centre and outside, integral corporation becomes an accomplished fact, where balance is achieved between interests and forces of the economic world. Such a glance is only possible within the sphere of the state, because the state alone transcends the contrasting interests of groups and individuals, in view of co-coordinating them to achieve higher aims. The achievement of these aims is speeded up by the fact that all economic organizations, acknowledged, safeguarded and supported by the Corporative State, exist within the orbit of Fascism; in other terms they accept the conception of Fascism in theory and in practice. (speech at the opening of the Ministry of Corporations, July 31, 1926, in Discorsi del 1926, Milano, Alpes, 1927, p. 250) The Doctrine of Fascism, Benito Mussolini, 193239

In Maine, today, one could just replace “The Ministry of Corporations:with §3304.Industry partnerships, passed by the Maine Legislature in 2015. 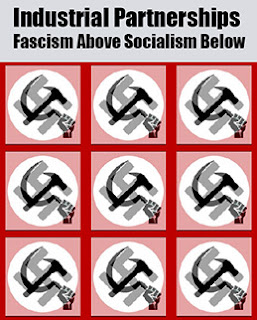 One also finds the historical origins of the “quality jobs” sector in Mussolini’s writings:

Grouped According to their several interests, individuals form classes; they form trade-unions when organized according to their several economic activities; but first and foremost they form the State, which is no mere matter of numbers, the sums of the individuals forming the majority. Fascism is therefore opposed to that form of democracy which equates a nation to the majority, lowering it to the level of the largest number but it is the purest form of democracy if the nation be considered as it should be from the point of view of quality rather than quantity. The Doctrine of Fascism

It is not the role of the DECD or Maine’s creative economy to protect American and Maine made products from fraudulent imitators. If the local government does not protect the interest of Maine and American made manufacturing from fraudulent imitators abroad, then who does? Foreign Trade Zones facilitate the foreign imitators by providing the facilities where the transformation of the identity of country of origin can take place.

Here is the description about what Aid to Artisans does from their website:

This new partnership will broaden ATA’s capacity to transform artisan skills into profitable businesses in emerging countries. ATA’s signature approach is centered on market driven product development, entrepreneurial training and access to ATA’s international buyer network, developed during more than 38 years of creating sustainable income for artisans in more than 110 countries. Creative Learning brings expertise in large-scale development initiatives aimed at improving infrastructure, upgrading health and education, creating jobs, and preventing or reversing damage to the environment. With support in management and program design from Creative Learning, ATA will continue to leverage its global expertise for compounded economic impact, bolstering linkages between artisans and international markets Aid To Artisans, About Us ( emphasis mine)

Like most organizations in Maine, the local development group uses the coded language of the State rhetoric. In the global economy, with many organizations, expressing their goals using similar language and concepts, crafts are used to develop economic independence in “third world countries”, where the global low cost labor markets used by large corporations with obligations to the shareholders to maximize profits, manufacture. Is there a connection to the “grass roots”  non-profit global economic development initiatives which use the crafts to stimulate economic independence ? “Crafts”, “making”, and “manufacture” are words which mean the same thing, but in American politically correct society, “production” is a word on the “Do not use list”. My application for fiscal sponsorship as a social enterprise, which would use the crafts as a way to develop economic independence in low income areas of Maine, was rejected because I used the word “production” on my application, which the board said meant I was only in it for the money, although Andersen Design has never had shareholders and so is not obligated to maximize profits. We competed successfully for years in a market dominated by products made in global low-ost markets. The large corporations which sells a mug in the same price range as we do, but has it manufactured in the global low cost market, makes a much larger profit.

PREVIEW LINK TO ANDERSEN DESIGN KICKSTARTER PROJECTWe Need To Develop A list of supporters who will pledge on day  one before we can launch.We are also looking for talent who can help us to produce the video

Later I ran into the taboo against the word “production” when I invited a local individual over to meet with our group about developing a video for our Kickstarter project, or so I thought. Instead he sat at the table and proceeded to play the role of business consultant. When I used the word “production”, he stopped me mid-sentence, to tell me I should not use that word. He then proceeded to tell us that we cannot do a Kickstarter because we are not a start-up company- using the word “kickstarter” to justify his logic, displaying his lack of real research into the development of KickStarter. KickStarter is being used today to launch products on the market and to finance ceramic production studios. Kickstarter is a free enterprise development, which is a counter political philosophy to a centrally managed economy. Perhaps this explains why one finds no support for developing a KickStarter project from local economic development groups, apparent extensions of the state, whose political philosophy is expressed above in the findings for Maine’s Department of Economic and Community Development, which performs the planning function for the FAME corporation, which concentrates and redistributes wealth in Maine. And the web weaves on.

Our would-be collaborator never discussed making a video.It amazes me that one cannot find support for making a video. This is a natural business for someone to start up in today’s economy or for economic development groups to offer, but it seems, it is not consistent with central management’s agenda to offer services which might help independent grass roots entrepreneurs in the USA.

So many years later Wendy Rosen is still an activist for indelible labels on foreign imports and still the government does nothing.It is aligned with the new global world order like any hot shot should be!

This is Part three in a Series which starts HERE