a : fearlessly using one’s life experiences in a song, a blog, or whatever….

c : a point of view or tenet put forth as in a personalized narrative

This week many events occurred that culminated in changing the name of this blog to Andersen Studio Evolution Diaries, inspired by words said by Russel Smith from SCORE with whom we met yesterday. Russ said many businesses die off because they fail to evolve and so this blog has just evolved from being KickStarter Diaries to being about a more diverse concept of evolution. This is the moment when we let go of everything and toss it all up into the air and see where it all lands. The hardest thing to let go of is The Great American Ceramic Artist Designers Network, but I do so as an act of faith in that if it is meant to be, it will fall into its place in the new order that forms when the cards fall to the ground.

I was pondering doing another KickStarter project but probably won’t in part because KickStarter has invited a lot of negative energy. The latest occurred this week when I encountered a gang attack on a  Facebook Craft Business page. The attack came in response to a blog post that I posted quite a while back in which I mentioned KickStarter, which was enough to give the gang the idea that I was asking for their advice on why our KickStarter project was not funded. Predictably they decided the project was not funded because I did everything wrong starting with the length of what I wrote- which, I was told by the proclaimed well wishers, is in violation of an unwritten KickStarter code that mandates that one produce an advertisement- not a life story- this code being an extension of the metaphorical Farenheit 2013 code that posits that all human thought be limited by the parameters of a twitter on one end and an elevator pitch on the other. This metaphorical code is an allusion to the science fiction novel by Ray Bradbury, Farenheit 451.

While the gang’s meme maintained  that KickStarter mandates that one’s pitch take the form of an advertisement, I conceived my pitch as equivalent to an “about us” editorial. The length was a intentional choice.  I am well aware that there are many who believe that all forms of communication should be short and sweet but I figure no one has to read the whole unless it interests them, and those that are interested enough to read the whole are probably the class of people who might have an interest in my vision of the Great American Ceramic Designer Craftsmen Network. As it happens Russel Smith did read the whole thing , which gave him some background that likely increased the relevance of our meeting, which, as it turned out was just what it needed to be, resulting in a planned next meeting with an attorney knowledgeable in the area of licensing, an option that I have long felt that we need to understand in order to make informed decisions about the direction in which to take our company

The Craft Biz gang came up with such gems of advice as “my elitist approach of presenting our business as special obviously wasn’t working” ! I wonder what they think the purpose of advertising is.  They proclaimed that I had not presented my idea clearly but to my impression they lacked clarity – or perhaps I should say the lacked the ability to pay attention to what is being said. They told me that I was failing to “absorb” their critique and  I in turn could have told them that they failed to absorb the content of my Kickstarter presentation, perhaps because they were distracted from the content by their obsession with word count. How does one reconcile  elitism with a business philosophy of creating a hand made product affordable to the middle classes? By definition, the “elite” excludes the “middle” and ironically what makes Andersen Studio special is that intention to design and produce for the middle class market, and in that choice we carved out a unique place in ceramic history. By definition production ceramics is not included in the elite market place, which is centered in limited editions and one of a kind work. I am sure the adjudicators of my KickStarter project would be offended indeed if I had brought this much attention to detail into the conversation. One angry poster was already proclaiming the standard “do not indulge this poster !”, without occurring to his own thought process that he might realize his own ambition by simply disengaging himself from the dialogue, but he was preoccupied with organizing a gang event. Has he lost all ability to act on an individual basis and become restricted to movements in which the gang acts in unison as a pod like creature?

And so , to my mind the theme of the critique falls into the individualist versus the collectivist debate By definition an advertisement should communicate what makes its subject special but here I am being portrayed as an elitist for portraying our ceramic enterprise with its products and long history as special, So if their use of the word “advertisement” doesn’t mean communicating what is special about the subject, what then does it mean?  Left to my own interpretation of both the language and behavior of the pod-like gang, as well as some checking into their own FaceBook Pages, I conclude that by “advertisement” they mean “corporate”, as in targeting mass consumption- but that is never been what Andersen Studio has been about. Ours is a history built on individualism and the personal- even as, in contradistinction our medium is production ceramics ! Somewhat of a dichotomy of which the achievement of individuality expressed through a production process is indeed that which makes Andersen Studio special. Andersen Studio’s brand is symbolic of American individualism. 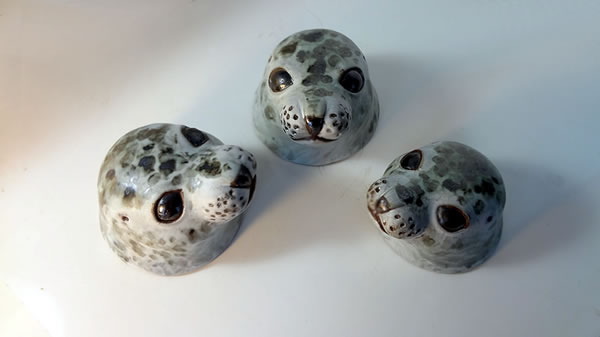 Last but certainly not least, this week brought interest in The great American Ceramic Designer Craftsman Network from Greenville Maine, also in response to the ideas that I have written and published on line. A second generation Andersen collector who says ” I responded as a private citizen and as a clinical counselor who has worked with many people who are depressed because they have no work.” I wrote back that rural people have always been our best employees but that there needs to be one committed and inspired person who will take responsibility. I would very much like it if one of the cards that falls into place when they all come down to earth is the Greenville connection. It is just such a location that I have written about in my political blog where a ceramic slip casting production can help to vitalize a low income area in such a way that it utilizes the natural abilities of a pre-existing rural population, whereas many government programs are often plans to displace pre-existing populations, bringing in jobs but also importing new workers that eventually displace the pre-existing populous.