Preserving A Cultural Tradition and a Way of Life. 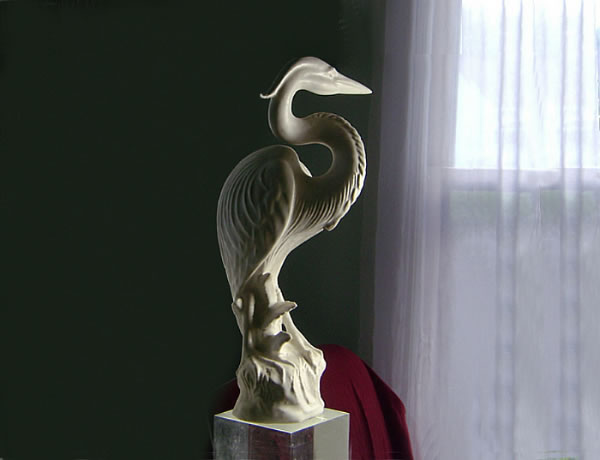 In 1952 Weston and Brenda Andersen moved to the coast of Maine to set up a ceramic design and slip-casting studio. They opened up shop in a two hundred year old barn on Southport Island on the Boothbay Peninsula. As soon as they opened their doors, and there after, collections began which have been handed down from one generation of Andersen collectors to the next.
It was a grass roots collectible movement. No grand authority proclaimed that the Andersen work was the thing to collect. Andersen Stoneware became collectible through the inclinations of thousands of individual collectors acting on their own. Each collector made a personal discovery and iconic connection – not only of the Andersen line but with the individuality of each hand crafted piece.

Andersen Studio’s first documented limited edition sculpture is also one of a few such limited edition works to be offered designed by founder Weston Neil Andersen.
Art collector, Reese Palley, writing in The Porcelain Art of Edward Marshall Boehm, describes the popularity of a work as even more important than the size of a limited edition in determining its future value. The Heron is an exceptionally beautiful work, about which we have received many inquiries since it was first designed in the 1990’s. At that time only a few Herons were produced as the piece proved to be problematic during the firing process and the mold needed to be re-worked in order to resolve the problems.  Ever since until now the mold has been laying dormant.

The fundraising goal of a KickStarter Project represents the amount of funds that must be raised in order to retain any of the funds. However Kickstarter projects commonly raise funds far and above the stated goal. The “above and beyond” fundraising goal of Andersen Studio is to capitalize a new production and customer fulfillment facility and an expanded organization which is absolutely necessary for growth in the age of the internet commerce. The marketability of the Andersen’s classic line of designs is a proven fact. Over its history Andersen ceramics have been sold in small retail shops, large department stores and catalogs, Museum galleries and online. Andersen has been a top seller in distinguished locations such as The America House, which was located across the street from the Museum of Modern Art in New York City. Andersen Studio has been recognized for its place in ceramic history by such sources as VaseFinder.com and numerous antiques dealers.

As Andersen Studio grew, it spawned a cluster of ceramic slip casting enterprises on and about the Boothbay Peninsula. In today’s economy it is more difficult to start and maintain ceramic slip casting business but Andersen Studio has an impressively developed line and long historical roots that has enabled it to maintain the number one spot on Google for it’s prime search term “ceramic birds” and first page placement for other relevant terms. Although we made the decision to stop actively pursuing marketing until we can find a way to expand our organization to meet the needs of the new markets, our online presence grows organically on its own with our email list expanding daily.

Andersen Studio is also looking into the future to ensure that the uniquely creative business that our family built can be passed down to future generations of American ceramic designer craftsmen and so we have envisioned the Great American Ceramic Designer Craftsmen Network. This is a lofty and challenging goal but Andersen Studio is unusually suited to be a private sector leader in pursuit of the dream.

KickStarter is the modern day version of the most common capital resource for micro-economy businesses- through friends and family. Andersen Studio knows that we have many such friends because we have received so many letters of appreciation from our collectors over the years. The challenge is to spread the word and let the world know about our project. We have many great rewards to offer from collectible ephemera to collectible ceramics. You can read more about our project and our vision on our blog Andersen Studio KickStarter Diaries. Please join us in kickstarting an evolution.

Slip cast ceramics is an opportunity industry, which can be located in low income areas- such as the 108 towns whose populations Gubernatorial hopeful  Steve Steve Woods recently suggested should have its populations relocated to urbanareas. In our long history, Andersen Studio has always found the local Maine people to be our best employees. Although we cannot compete with the taxpayer subsidized economy that Maine’s state economic development corporations have built in our state’s urban centers, our company can be classified as an “opportunity business”. A ceramic slip-casting company can regenerate the same types of communities that Gubernatorial candidate Steve Woods suggests should be “relocated” . The Andersen Studio Retail Gallery has always been “destination shopping”, setting a precedence for what could be destination shopping in some of the underdeveloped areas of Maine- just as LL bean was once destination shopping.

Andersen Studio has many skills to teach beyond skills specific to ceramic production, including creative marketing and photography skills. There is talent hidden in the under developed communities that Steve Woods would simply re-locate but talent needs an environment in which to grow. A ceramic slip casting network such as we visualize as the future evolution of the business that our family built can create just such an environment, any where- not only in Maine’s urban centers which receive the lions share of business capital distributed by Maine’s tax payer subsidized economic development corporations.

Ceramics is an ancient craft that has long been important in the cultural identities across the globe. Andersen Studio is in a unique position to lead the culture tradition  of American ceramics into the future- with a little help from our friends.

Our Kickstarter project can be found at www.kickstarter.com in the local listings for Waldorboro, Maine. There is also a link on our website andersenstudio.com
Once again- Here is the link to Andersen Studio’s Kickstarter Fundraising Project