Father’s Day is June 16 This email is devoted  to honoring our father, Weston Neil Andersen,  the founder of Andersen Studio and Andersen Design, 91 years old.

Last night I sat with Dad alone on our front porch overlooking the pond and he spoke of  concerns for his family and the future of the business. Dad is a man who cares profoundly about others, both in the sense of family, which is the deepest concern of all, and the terms of community, as in an extension of family.   I often throw tarot cards. The card most often representing Dad is the Hermit Card , showing an old man on a mountain holding up a lantern. Weston has wisdom, of the sort that one wonders  who will carry it on after he is  gone. Today old values are slipping away like the Mists Of Avalon–  a book I read many years ago about the transformation of culture as it evolved from paganism to organized religion. These times are as transformational and Dad is now an icon of the past. The Hermit card shows a man standing alone and independent on a mountain with a lantern of shining light. Dad created an unusual independence in the art business that he founded. It is a complex business that in-sources just about everything from design to production to marketing. As such the only outside authorities passing judgement on the value of the work are our collectors and the market, and so we were raised amid an  independence of art world institutional authorities but with affirmation coming from our parents and the community with which we interacted through the process of operating a business. Our collectors identified the work produced by our studio as art in the many correspondences that we received. Weston has long been recognized for the work he achieved in ceramics and business but now wonders if what he built will survive after he is gone. This is perpetually on his mind. It is a business that came to birth through years of struggle and devotion, which is unusual to come across today.

Dad has always read a great deal. Before Dad had macular degeneration, we shared an interest in quantum theory philosophers. One book that we both found inspirational as as well as informational is The Non-Local Universe, by Menas Kafatos and Robert Nadeau. The theme of the book is that of wholeness existing in all parts and parts exisying in the whole, illustrated by using the hologram as a metaphor. Dad continued to listen to books on tapes after he could no longer read but a few years ago he fell down on the pavement and suffered a  brain injury. Then he stopped reading but he thinks all the time, sometimes about his life and at other times about the future. Once he slept for two days and when he woke up he told us that he had gotten a lot of work done. When Dad was in the first stages of recovering from the brain injury, he was talking repeatedly about “systems management”. That’s when I connected with the central strength of his character. Many recognize our father for his talented work in ceramic design but behind that- which made it all possible , is my father’s incredible understanding of systems management-  an understanding that involves the way that the whole is in the parts and the parts are in the whole. As my father was recovering from the brain injury, he was applying the same understanding to recovering his own mind. 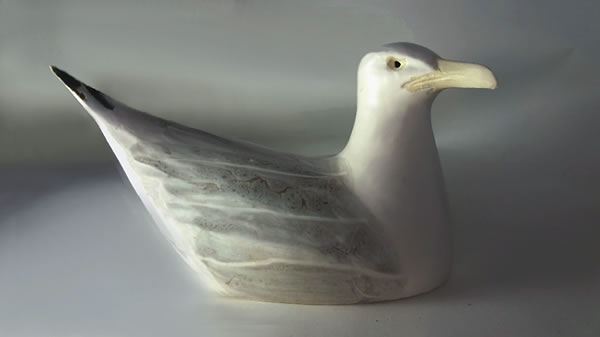 ﻿The Floating Gull is the first Nature Art created by Andersen Studio, The slightly stylized work has a whispering geometric appeal with out losing its natural quality﻿
After the brain injury, Dad’s essential character remained the same but his psyche was rearranged in an interesting and unusual way. I can no longer engage in a discussion of the molecular make up of ceramic glazes with Dad, a capacity which uses the intellectual capacity of the mind, but in place of that has emerged an intellect of feelings. Dad expresses his feelings with a childlike purity merged with a mature understanding of life. His thoughts are often expressed cryptically. Language is constructed in creative and original patterns. Sentences are short or even partial. Dad will talk about a person but not identify who they are although I can often probe to find out more. He often answers with merely a nod for yes or no, sometimes speaks in sign language and at times refuses to speak at all while at another moment can become quite loquacious with a flow of thoughts which are  perceptive and economically delivered.

A while ago Dad went with us to meeting with our lawyer We met in a room in the Damariscotta Library. Dad walked in and announced “We can do a lot for this community”. That’s the way Dad thinks. Before the meeting was over he had switched places with the lawyer at the head of the table. He made an emphatic point to the lawyer that he had married his wife, with whom Weston  still remains deeply connected.
This time when Dad came home from rehab the very first words Dad had to say are “We need to work with people we do not know” He is right of course. We need a  organization with people of many different sorts of skills. As a starting point we are looking for a business consultant who understands licensing.

I keep an on going blog about our business at Andersen Studio KickStarter Diaries.

I hope some will enjoy following it with interest.

Another view of the Tufted Titmouse Sculpture waiting  mold making process to commence.