Spread the love
TWEET THIS ! http://goo.gl/FBBf9D
Andersen Studio is not a school but it is a place of learning. When Weston and Brenda  brought their ceramic slip casting studio to Maine, there were no other slip casting studios in the area and so they taught the skills of ceramic slip casting, glazing, and decorative techniques to local women who had formerly worked in the fish-packing industry.
Weston and Brenda also created their own marketing brochures. We still create our marketing in house but today it includes web design, social networking and related skills which we can also teach to others. as we encourage them to learn on their own.

This historic Maine Coon Cat was modeled by Brenda Andersen probably in the late fifties. It is featured in Images Of America. There were a few pieces cast but the mold was retired early on because the Coon would split in the mold. As you can see, this Maine Coon has places at both ends that hold the mold in place. As the clay dries in the mold , in shrinks in size. If a mold is anchored at both ends it will split at the middle.

We love this wonderful Coon and

after all these years would like to re-configure the mold. We are hoping to include the making of the Coon mold in our KickStarter project and to offer the Maine Coon Cat as one of the rewards.

The then director of Traditional Arts, Mr Keith Ludden, said I would have to make a convincing case that ceramics is a traditional art. This took me aback since ceramics is one of mankind’s oldest art forms. Most culture’s have evolved their own traditions of ceramic art.

I did not pursue the inquiry further. Later I participated in the Traditional Arts forum on the Maine Arts Commission. This forum had one topic. All topics were created by the government, none by users. Once again it was managed by Mr Ludden. I asked what qualifies a traditional art and Mr Ludden recited a list, to which I responded that all applied to our studio, including being handed down from one family generation to the next. Mr Ludden said I was off topic.

Ceramics is a traditional art form since the dawn of civilization with each culture creating its own uniquely identifiable tradition. Andersen Studio’s ceramic art is intrinsically associated with Maine. At one time Maine Governors would use our wildlife sculpture as gifts. Andersen ceramics are iconic in individual family traditions. There is a familiar story that many people tell of how their grand parents discovered Andersen Stoneware and ever since their family has collected Andersen artwork. There is an intimate identification when the individual discovers a collectible, independent of external influences. Andersen Studio became a collectible through an authentic grass roots movement.

In the larger world, ceramic slip casting is a traditional craft that is endangered in Western civilization as long established potteries opt to “outsource” to countries with low priced labor, few workers rights, minimal environmental laws and low corporate taxes. The idea that I am entertaining – that this is a time when one can grow an American slip-casting industry must seem audacious on the surface, considering the rapid decline of the pottery industry in the west.

I am introducing three articles about the British Pottery Industry which hint at an emerging shift in the outsourcing trend and are also applicable to what is taking place in Maine as our economy is redesigned from the top down by state corporatism.

The first article, The Strategic Management of Outsourcing in the UK Ceramics Industry , by The Manchester School Of Management, was written in 2001. It is a comprehensive study examining the advantages and dis-advantages of outsourcing and also contrasts, with an eye toward integrating, human behavior and institutional (by the numbers) factors that impact decision making. It applies as much to government institutions and it does to the private sector, especially in the era of the “quasi” which blurs the distinction between the government, non-profit, and private sectors. I am introducing this paper as a resource for anyone who might take a serious interest in our vision for the future of Andersen Stoneware. Andersen Stoneware is distinct from the examples in this paper, which are a company producing hotel china, a company producing fine “inspirational” tabletop china, and a company producing low cost earthen ware. Of the three, only the latter had embraced overseas outsourcing at the time this paper was written. Andersen Studio produces art sculptures and inspirational functional ware and operates at a much smaller scale than the companies examined in this paper, but If I were to find myself on the verge of implementing my vision. I would want to read this paper several times over.

This paper points out that outsourcing is not new in the ceramics industry but that there is a fundamental difference between outsourcing locally and outsourcing to a foreign county.

The British identify their pottery industry as a “heritage industry”. Andersen Studio has been given a similar recognition in Jim Harnedy’s Images Of America, The Boothbay Region 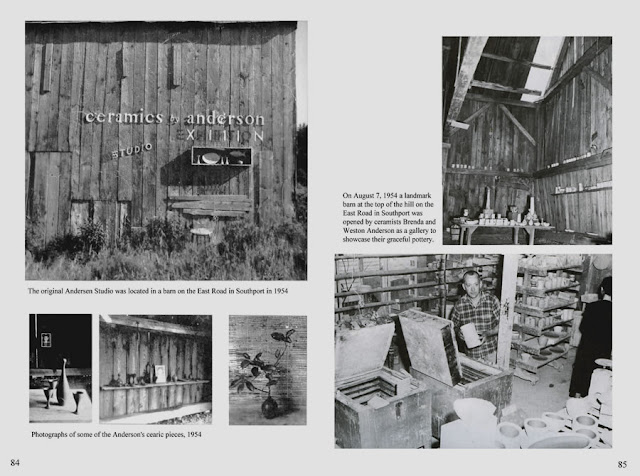 The second article, written in 2007, is  Once Made in England  by Elizabeth Hart – How the former pottery workers explain the decline of  the UK pottery industry focuses primarily on the workers in the British Pottery industry and tells of their feelings of loss of dignity within society that resulted from the loss of employment in the pottery industry. It also includes this inspirational quote about the philosophy of Josiah Wedgwood

Wedgwood was a Master Potter in his own right, a hard task master and strict disciplinarian: he was also a talented designer and innovator, who knew how to create markets for his ware nationally and internationally. Wedgwood and his fellow industrialists were inspired, amongst others, by the great French Philosophes. He was an Enlightenment thinker who was against slavery and believed that manufacturer was the driving force of improvements in society, including for the potters he employed. Wedgwood was a shrewd and talented businessman and his approach to manufacture, design, and marketing is used as an exemplar at Harvard Business School even today. An eighteenth century industrialist, his values, however, were those which the craftspeople I have brought to you today, would recognize, identify with and hold to. In effect they are twentieth century industrial workers whose attitudes to work, to bosses and to the clay were moulded in an age of Enlightenment.

The Third article is short and sweet, a cultural blog CharlotteHiggins ONCULTURE blog for the  Guardian wrote the following in the fall of 2011

But one of the things that has changed – indeed was in the process of changing while I was growing up – is the state of the pottery industry. When I was young in the 1970s, the small and medium-size firms were being gobbled up by the giant companies, often to the detriment of design values. Later, it seemed to many companies to make good business sense to mothball Stoke factories and outsource production to the far east. But the quality of ware thus produced could be variable, and meanwhile the industry seemed slow to second-guess the changing fashions in tableware: a trend for chic informality replacing the full-dinner-service culture of previous decades.

Last week it was deeply heartening, then, to see that for some firms, such as Portmeirion, “insourcing” – bringing back pottery production to Stoke – was a new buzzword: that actually making things in Stoke is possible, and economically viable. At a time when one of the few things uniting Ed Miliband and George Osborne in their conference speeches is the conviction that Britain ought to be a producer, not just a consumer, of things, I hope Stoke can lead the way. 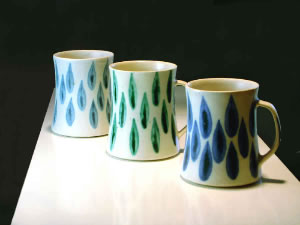